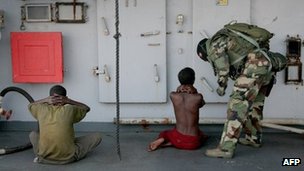 French forces have been pursuing Somali pirates for several years
Continue reading the main story
Six men have gone on trial in Paris over an attack on a yacht in September 2008, in the first French prosecution of suspected Somali pirates.

They are charged with hijacking, kidnapping and armed robbery after allegedly seizing the boat and its crew, a married couple both aged 60.

Defence lawyers say the suspects were forced to take part in the attack.

The defendants in Paris, aged between 21 and 35, face life in prison if convicted.

They are accused of attacking the Carre d’As on 2 September 2008 and demanding a ransom of $2m (£1.3m; 1.5m euros) for the release of French couple Jean-Yves and Bernadette Delanne.

The yacht and its owners were freed by the French military two weeks later.

A lawyer for one of the defendants said the unnamed accused man was a fisherman who had been forced to take part in the attack because he was a seaman.

Another lawyer said the organisers of the attack were still at large.

The International Maritime Bureau has said that better policing and improved security have reduced successful hijackings by Somali pirates this year.

Nevertheless, attacks linked to Somalia made up more than half the piracy incidents reported worldwide.

A US study found that maritime piracy costs the global economy $7bn-12bn a year.