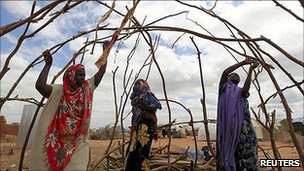 War and drought in Somalia are leading an unprecedented number of people to flee across the border into Kenya, an aid agency says.

Save the Children is reporting that every day, about 1,300 people – at least 800 of them children – are arriving at the Dadaab refugee camp.

The monthly number of new arrivals has more than doubled in a year, it says.

Aid workers at the camp say the children are exhausted, malnourished and severely dehydrated.

The situation in Somalia is exacerbated by the conflict between Islamists of al-Shabaab and Somalia’s transitional government, backed by African Union peacekeepers.

The United Nations refugee agency says there are 117,497 Somalis who have also crossed into Ethiopia – 31,000 in the past five months fleeing from drought and conflict.

Save the Children says some families are walking for more than a month to reach the camp in Kenya.

The UN’s World Food Programme (WFP) estimates that 2.5 m Somalis are currently affected by drought, with 58% living in the South of the country.

But as many as a million have been beyond the reach of the WFP since January 2010, says WFP’s Peter Smerdon in Nairobi.

“We are not working in areas of the South controlled by al-Shabaab after our teams were threatened, intimidated and there were demands for payment,” Mr Smerdon told the BBC.

Children are arriving into Dadaab barefoot, after walking six weeks. ”

The conflict in Somalia forces many to head for the Kenyan border but a severe drought and the unaffordable cost of food has made the situation worse.

Made up of three settlements, Dadaab is often referred to as the largest refugee camp in the world.

“A mother arrived at one of our feeding centres saying she’d actually left her children behind in a village because she couldn’t watch them die,” Sonia Zambakides, Save the Children’s Emergency Manager for Somalia, told the BBC’s World Today.

“She had walked away and left her six children in a house.

“Two of them ended up dying and we managed to reach four others.

“They’re covered in sores and wounds, they’re acutely malnourished, they’re completely dehydrated and that is preferable to the conditions they are living in in south-central Somalia.”

The conflict in Somalia forces many to head for the Kenyan border but a severe drought and the unaffordable cost of food has made the situation worse. 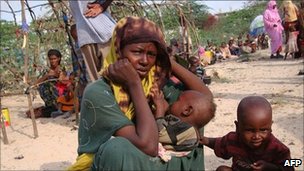 A Somali mother near the capital Mogadishu, but many families are beyond the UN’s reach

The humanitarian agency Medecins Sans Frontieres says many of the new arrivals are in desperate need of healthcare.

It says almost half of the children arriving there have never had a vaccination.

With the Somali conflict continuing and several more months of drought expected, conditions in the already overcrowded refugee camp are likely to get even worse.

Efforts to decongest the camp and relocate the refugees have so far made little difference.

But the drought is now being felt across a vast region of the Horn of Africa, with areas of northern Kenya and Ethiopia also affected.

Are you in Kenya or Somalia? Are you an aid worker in the area? What is your reaction to this story? Send us your comments using the form below: